Whistler Mountain will be opening one week ahead of schedule. The early opening has been made possible thanks to favourable early season conditions, including natural snowfall and prime temperatures for snowmaking. Blackcomb Mountain will open as scheduled on November 26.

Whistler Mountain opens on November 19 with five lifts running, including the Whistler Village Gondola, the Creekside Gondola, Emerald Express, Big Red Express and Franz’s Chair. More details about what guests can expect on November 19 will be available early next week.

Opening Day has always been something to write home about, fill up your thermos…(or your flask) and git in line, for the most exciting of all Whistler events!!!

Here’s some fun memories of opening days gone by… 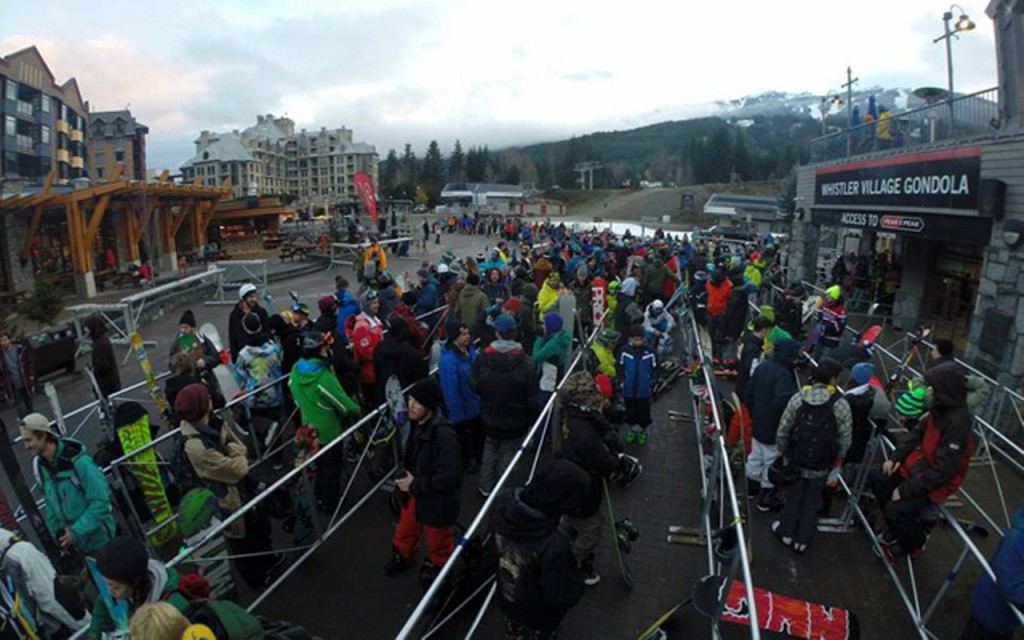 There’s stoked, and then there are the Bathgate brothers, who, along with a few friends, camped out for over 40 hours this week to get first crack at the mountain on opening day.

Parked in a tent since 1 p.m. Thursday, Nov. 20, the teens have been coming early to camp out ahead of opening day for several years, and wanted to make sure they were first in line this time around.

Lining up for opening day November 2012, Whistler Mountain opened 5 days early. With 10 cm’s of snow Friday night, another 15 cm’s falling during the day, and prizes given out to the first 1500 guests, the stoke for the winter was on!

On The Snow Article November 22, 2011 shares the excitement of opening day, not just any day but a power day!

The line up at the gondola strung through the village long before daylight for opening day at Whistler Blackcomb last Friday. It wasn’t just the first day of the ski season, but a powder day.

With 39 centimeters of snow falling in the 48 hours prior to the opening of Whistler Mountain, skiers and riders were treated to packed powder on groomers and powder shots in the off piste. The line up at the gondola started at 10:30 a.m. the day before the opening. By the first gondola, skiers and riders were stoked to hit the slopes. Five lifts ran on opening day, and six park features at the top of the Emerald Chair kept jibbers busy.

An epic opening day, 560cm of snow fell during the month of November. the videos speak for themselves!!

Check out the newly released “50 Years of Going Beyond” to see much more of memory making moments skiing and riding.

Get the best value for your Whistler early opening weekend and book owner direct. We were Whistler’s very first vacation rental website and have been matching up owners and guests for over a decade.