You thought last year was fun? Over 80 breweries, 6 seminars, 4 cask events and 7000 attendees are sure to make this year even better.

Here’s a teaser video to get you stoked…

This year’s main event will stretch over Saturday and Sunday afternoons at Whistler Olympic Plaza, doubling hosting capacity (3,500 per day) and the number of breweries (40 per day) on display.

There will be weekend passes for those who would like to attend both days, as well as the beer festival’s educational and culinary program that will stretch over a five-day period.  Liquor service will be from noon to 5:30 p.m. on both days.

beermebc.com press release June 9, 2015, highlights what new for this year: 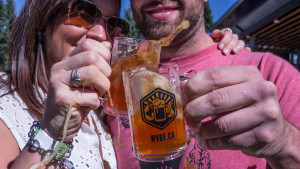 The festival’s expansion doesn’t stop there; in partnership with the Province of British Columbia and Resort Municipality of Whistler,  the festival is hosting a brewing industry icon panel discussion called “Master Crafters”. This will be the kick off event of the festival, held on Friday September 18 at the Westin Hotel and Spa Whistler.

“Master Crafters” will be hosted by Destination B.C.’s beer blogger and author of Craft Beer Revolution, the Thirsty Writer – Joe Wiebe. Wiebe will be moderating a B.C. and American panel through topics such as expansion, difference in style, generational shift and the limitations of the industry. 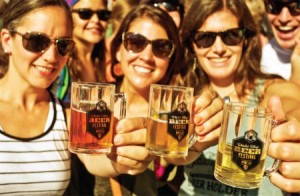 The B.C. panel includes Brent Mills of Four Winds Brewing Co. from Delta, Gary Lohin of Central City Brewers & Distillers from Surrey, and Sean Hoyne of Hoyne Brewing Co., from Victoria. The American panel consists of; Jamie Floyd, Co-founder and brewer at Ninkasi Brewing, from Eugene O.R., Kim Jordan, co-founder and CEO of New Belgium Brewing, from Fort Collins C.O., and Dick Cantwell co-founder and former Brewmaster at Elysian Brewing, from Seattle W.A. Once the talks are done, the Emerald Ballroom at the Westin Resort & Spa Whistler, will transform into a reception style event with live local music and lots of mingling with the craft brewing industries A-list.

For a complete list of events and times and to buy tickets check out the Festival website.