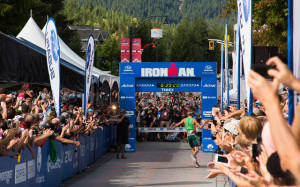 Having run my first and last marathon in Portland, I remember how grateful I was to have the many volunteers everywhere helping make the gargantuan task at hand possible.

The community of Whistler came out full force to show support for Whistler’s second Ironman.

After running the 42 km part of program, I couldn’t even imagine swimming 3.86 kilometres through chilly mountainous waters, cycling 180 km over coastal mountains AND running 42 km in 30 C weather to finish your 10-hour day with a sprint to the finish for a place on the podium. Just under 2,000 athletes lined up at the start line this year down from 2,300 last year. 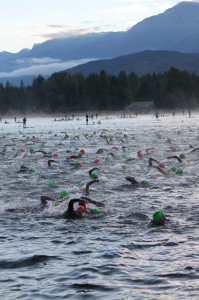 Some athletes are calling it the hardest Ironman ever, noting the climb back to Whistler from Pemberton as the crux of the course. However Taylor claims it is on par with other Ironman courses.

The fastest Whistlerite on course this year was Adam Ward at 10:20:49. Behind him was Mike Edwards, finishing at competitive time of 10:26:41. Marla Zucht, a four time Ironman finisher crossed the finish line on Sunday evening July 27, 2014 with a time of 11 hours 45 minutes.

And as noted in Pique Newsmagazine – triathlon world – Marino Vanhoenacker is back.

Meanwhile, Hawaii’s Bree Wee captured the pro women’s victory after making up some ground over the run course, earning the second full-distance Ironman win of her career in a time of 9:46:58.

IRONMAN is about persevering, enduring and being a part of something larger than ourselves. It shows the heights that can be achieved when we push beyond our boundaries and go the distance to earn the title… IRONMAN.

Congratulations to all who raced at the 2014 Subaru IRONMAN Canada!

Find a Great Vacation Rental and Relax in Whistler…

Cheap or luxury, studios to mansions… for way less than a hotel.

Cheap or luxury, studios to mansions… for way less than a hotel. www.ResortAc.com